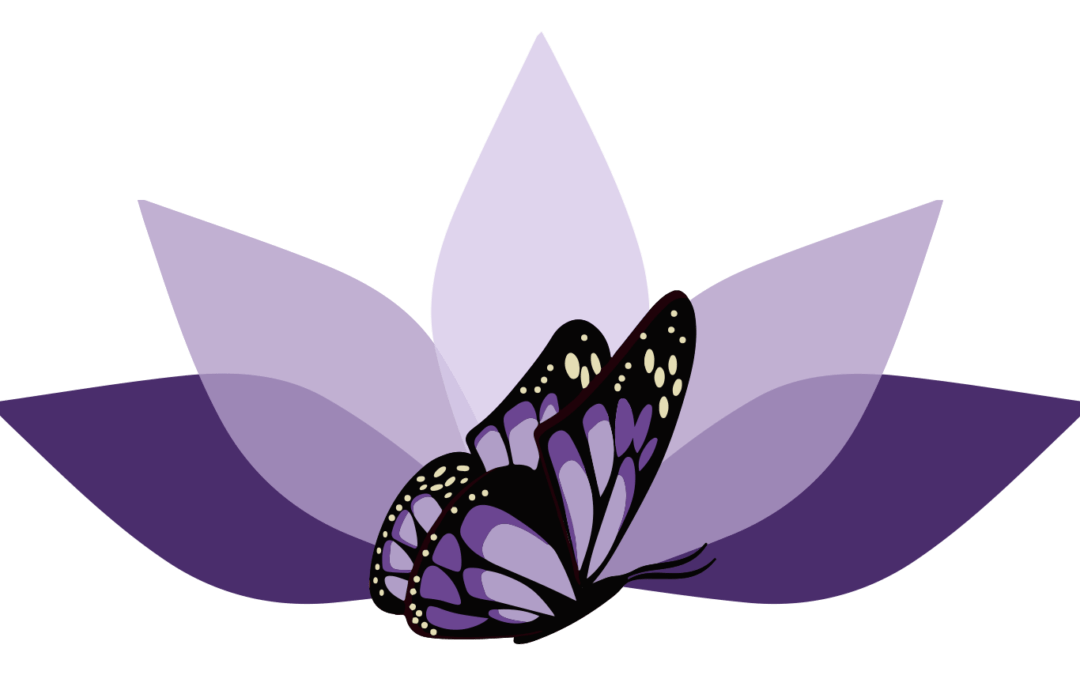 So, by the end of part 1 of this blog I had finished at the point where Julie and I were having lessons with Chris and Chris was coming once a fortnight to our group meetings to teach our members Tai Chi for Arthritis Part 1. This was becoming a very popular part of our programme, but this was itself becoming a problem. Group members were unable to progress far, as new people kept joining each week and we had to keep going back to the beginning.

Julie and I tried to think of ways around this problem, but we were at a loss, we discussed this with Chris and he went off one week commenting that “I’ll give it some thought!’ We just thought that was the end of it and he would forget about it. A couple of weeks later he came back with the comment “I’ve had an idea” I thought this sounded promising, but had no idea what he could have thought of, then he casually dropped his, to me anyway, bombshell of “I think you two should train as Tai Chi for Health instructors!” There was a very long pause before he got a response, Julie took it in her stride, but as the saying goes, I was ‘gobsmacked’!! I don’t know what I thought he was going to say, but it wasn’t that!

In part one of this blog I mentioned that I was shy and nervous, well I have got a bit better with age, but this was so far out of my comfort zone that it might as well have been in another galaxy! On the other hand, I knew if I backed out, I would be completely disappointed with myself, so in a state of great fear and panic I decided to give it a try.

Julie and I had about three months before the training course, so plenty of time to perfect a form that we already knew well, but I knew I needed some extra help, so I asked one of my doggy walking companions, who happened to be a hypnotherapist if she could help. Sharrie, from Think Hypno helped me immensely, she built up my confidence and taught me coping strategies that could help me in situations that make me nervous, not just tai chi training courses. 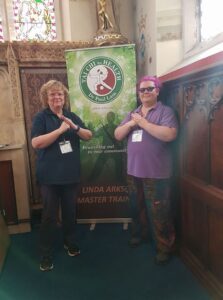 Strangely, the thought of teaching a class did not worry me anywhere near as much as the training course, but I survived thecourse and came out with my certificat

es. Angus, my husband, came to pick us up from our course and commented that we were a bit quiet, so we let him think I had failed. We were both just extremely tired, but poor Angus spent the journey home trying to work out how he was going to cope with my disappointment. I let him off the hook just as we reached home! In all my exams and college courses that I have completed throughout my life, this was, for me my greatest achievement. Tai Chi has given me both peace of mind and my biggest challenge!

At this point in time, we only intended teaching our Fibro Active Group members, but very soon we were approached by Jo from Strictly No Falling, she asked if we would consider teaching a course for people with balance issues and Strictly no Falling / Age UK would sponsor us. We thought about it and decided that we would do this, as it would earn us some money to support Fibro Active, especially as the subs taken at our weekly group meetings were not quite covering the room rent.

Our first open class was launched at ‘Spring into Action’ an event jointly hosted by Fibro Active and Strictly No Falling. We had a lot of interest at that first taster session with about 29 people attending; I think it was a record for Strictly No Falling! Julie insisted that we do a demonstration of Tai Chi for Arthritis Part 1 & 2, we both thought that the only ones watching would be those doing the taster session, imagine my horror when I turned round and the rest of the Spring into Action stall holders and attendees were watching!!

But guess what? I survived it! 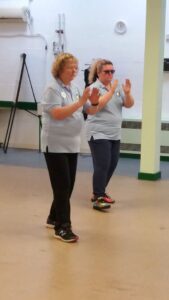 From the beginning of this first open class we have progressed to teaching 4-5 classes per week.

Tai Chi in the Park

Another of our ideas was to have an informal practice session, with no teaching, on the last Saturday of the month, we started this last year on ‘World Tai Chi and Qigong Day’ This first outing was quite successful, even though we struggled through storm ‘Hannah’ and ended up wet and very, very cold! It took me the rest of that day to warm up.

We have continued with these meetings which are open to anyone and have had people from all Tai Chi groups join in, but the loyal core are those in our and Chris’ classes. We are just trying to promote tai chi to everyone and to connect as many tai chi players as possible! Those that attend these sessions all seem to enjoy them.

In all my worrying and catastrophising (not anywhere near as bad as before Tai Chi and Sharrie) would I have dreamt up this disaster! Lockdown meant the end of tai chi and group meetings and the worry of not connecting with our group and tai chi students, some of whom can be quite isolated; but we soon thought of Zoom!

Zoom brought about a whole new way of teaching, our insurance stated that we should be able to see our students all the time, a bit difficult when we teach with our backs to our class! Between us we soon came up with the solution, I have a room large enough for all of me to be seen, Julie doesn’t, so I teach and Julie watches and nothing gets past Julie! We soon had four tai chi classes running plus our group session every fortnight.

Now with the lockdown easing we are about to venture out to our local park to begin real life classes. These classes will have to be small for now, but it is helping to get those of our students and members who can’t do Zoom out and socialising, at a safe distance of course. It gets me out too! I am used to being on my own and I am happy to be this way, but teaching has forced me to engage with more people, and amazingly I find I enjoy it!

I wish more people would try Tai Chi; it has an image suggesting that it is just for older people or those with mobility problems – but it’s not!! Tai chi is for everyone from very young to old, some athletes use it to help them focus and centre themselves before competitions; it has been used to help with exam nerves in teenagers. The buzzword of now is ‘mindfulness’ and this is what tai chi is! It has been around for thousands of years. However, the west is only just waking up to the benefits. As I’ve said before though, it’s not a quick fix, the physical benefits can be felt within a few weeks, but the benefits to health and wellbeing take a lot longer, possibly for the rest of our lives, but learning and challenging our minds should take forever and it’s never too late to start.

Sadly, there will always be those who say it’s too slow, or it takes too long to learn. One of my friends told me that she “wouldn’t be seen dead doing tai chi!” (It’s not that slow!!) Obviously, they are missing the point; I just hope that as more people start learning, more people will want to learn. If it were to become ‘trendy’, even my friend would probably give it a try!

I know that I will never be perfect, I will still mix up my left and right, occasionally suggesting that my students put their left hand under their right foot, I can mix up body parts too! This causes some amusement! But everyone seems to enjoy my ‘errors’ saying that it shows I’m human….but I very much enjoy teaching, I have gained a great deal of confidence since I first started tai chi. There is so much to learn! I know I will never be able to learn all that I want, but I have learned and am still learning different forms and will continue to do so for as long as I am able! Tai Chi has become a very important part of my life; I would be lost without it.

Through tai chi, I have met some amazing people including those who have helped to set up our classes, my kind and supportive trainers and especially all those who have joined our weekly sessions.

As a final note, in a recent crisis of confidence, Sharrie told me to write down all my achievements, and not to forget the Queens Award, as not many have managed that one!