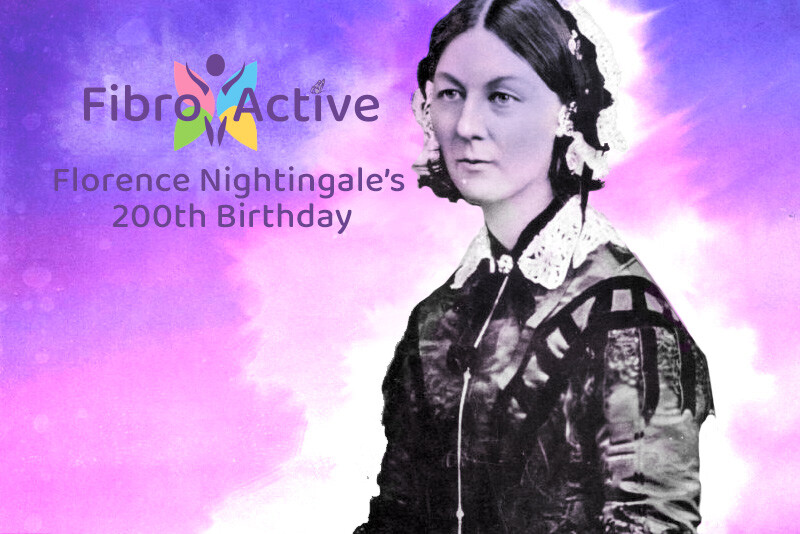 It is 200 years since the birth of Florence Nightingale on May 12th 1820, the famous ‘Lady of the Lamp’, who we honour each year on her birthday, which is also International Nurses Day in her memory.

More recently known to sufferers as International Fibromyalgia and CFS/ ME Day, with sufferers globally commemorating her birthday as ‘a kind of rallying point; their own lamp in the dark’.(1) Florence Nightingales immense achievements are widely recorded, however, the connection to Fibromyalgia and CFS/ME is segregated and often speculated.

Florence was named after her place of birth, Florence, Italy. Her family returned to England and had a new house built in Lea, Derbyshire called Lea Hurst. They lived there until 1823, the family moved on to Hampshire in 1825, however Lea Hurst served as a summer residence for the rest of Florence’s life. (2) Each year Florence would spend 3 months at Lea Hurst and she developed numerous connections in the region, many of which are still celebrated today. (3)

Florence found her calling to become a nurse. Pursuing a career in nursing was looked down upon by society at that time, especially for someone with an affluent background. (4) After much opposition, and against her families wishes Florence announced her decision to enter the field in 1844. She trained at Kaiserwerth on the Rhine in 1851 and also in Paris. In 1853 she became a superintendent of a hospital in London for invalid women. (5)

In 1954, Florence took a team of 38 nurses to care for the British soldiers fighting the Crimean War. Florence found appalling conditions and a high death rate of soldiers. She fought hard and revolutionised the nursing of soldiers. She worked endlessly to care for the soldiers themselves, making her rounds during the night after the medical officers had retired. She thus gained the name of “the Lady with the Lamp,” (6).

Florence didn’t just have the lamp, she was also ‘The lady who conducted pioneering and brave work as a statistician during a time when women were a rare presence in such fields. Florence Nightingale, one of the most prominent statisticians in history, used her passion for statistics to save the lives of soldiers during the Crimean war, and do ground-breaking work in data visualization that continues to be influential to this day.’ (7)

Queen Victoria sent Florence a specially made brooch to thank her for her accomplishments. However, Guys and St Thomas report that ‘While working at the British base hospital in Constantinople, she contracted a bacterial infection known as “Crimean fever”. Florence never fully recovered from this infection.’ (8) She continued to care for her patients and In 2015, Raymond,S writing for Guardian Liberty Voice stated that ‘One of the symptoms of the disorder is sleeplessness. She would use that time to walk the halls with a lamp and continue to care for the patients even through the night.’ (9)

Barbara Keddy, BSc.N., M.A., Ph.D., Professor Emerita, School of Nursing, Dalhousie University, Halifax, Nova Scotia, Canada. A fellow Fibromite and CFS/ME sufferer was also keen to look into why Florence Nightingale is linked with Fibromyalgia and discusses that ‘A person interested in Ms. Nightingale’s life would read about how after she returned from the war in the Crimea where she was faced with the deplorable conditions, she took to her bed, often refusing visitors, with ailments that were invisible and a condition that was without a name.’ (10)

On many websites it seems that the link between Florence Nightingale and Fibromyalgia is just speculation. However, Kevin White, MD, Phd justifies Florence’s ‘meticulous note-taking’. In ‘her very own diary, in which she documented the chronic widespread pain, fatigue and mental cloudiness she suffered over the last 40 or so years of her life.’ (11) White also mention’s having a dislike to the phrase Fibromyalgia and now personally calls it ‘Nightingale’s Disease.’

Despite her constant pain and fatigue, she did not shirk responsibilities and needed to let the world know the value of the profession of nursing, this became her ‘major achievement that raised nursing to the level of a respectable profession for women’.(12)

At the age of 38, things got a little too much and she became bedridden and she was often confined to her bed in the latter half of her life. In 1859, Florence still not to be defeated, wrote 2 books called Notes on Nursing and Notes on Hospital.

Guys and Thomas, proudly list Florence’s further achievements: In 1860, she established the first professional nursing school in the world at St Thomas’ Hospital. She founded London’s Nightingale School of Nursing, which raised the reputation of nursing as a profession.

In the 1870s, Florence worked with the government to push for legislation to significantly improve sanitation. Florence inspired Red Cross founder Henry Dunant. She went on to directly influence the setting up of the British Red Cross in 1870.

in 1883, Nightingale was awarded the first Royal Red Cross by Queen Victoria. She was the first woman inducted into the Order of Merit in 1907.

“There is no part of my life, upon which I can look back without pain”, Florence Nightingale

References made in this blog can be found below: